Genomes have evolved in nature and all populations in the past as well as in modern times have been evolving. There are many ways of origin of species in nature and the parental genome is improved and altered. Some of these natural mechanisms include genetic mutations, polyploidy, particularly allopolyploidy (natural hybridizations), chromosomal aberrations and related many inherent molecular mechanisms operative within individual(s). Many of these events have sometimes resulted in “genomic reshuffle” causing expressions of those DNA sequences which were once present in the distant past geological history (millions of years ago). Several such examples are prevalent among plants and animals.

Additionally, evolutionary mechanisms have evolved such organisms which are either connecting links between groups and or are unique amalgamated genomes such as Platypus among animals. In the past few decades, some rare plants have shown the presence of a few DNA stretches matching the DNA sequences on the human chromosomes. Papers dealing with any of these themes will be welcome for this session. 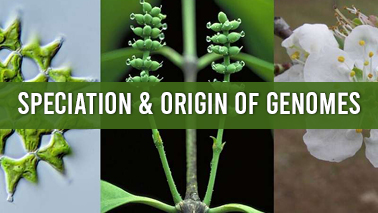